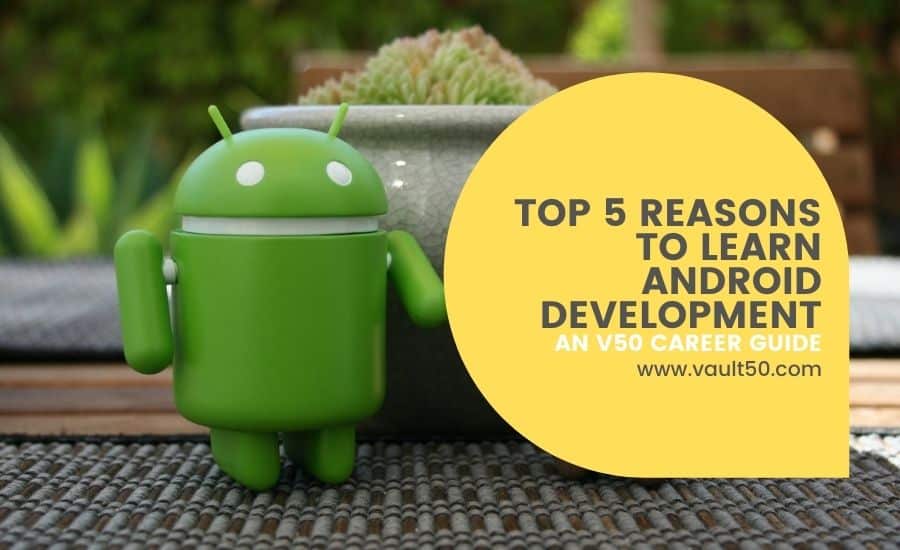 There are a number of reasons to learn android development, especially over the last year while many of us have been holed up inside our homes.

Learning a new skill has been one of the best ways to spend time during the lockdown, and with the easy accessibility of online courses, there has never been a better time to learn Android Development.

And considering it is estimated that there will be 4.3 billion smartphones in the world by 2021, the demand for those with Android development skills is going to be huge.

So with all that said, in this article, we are going to look at why you should start learning Android Development as soon as you can.

Before we dive into our top 5 reasons; let’s quickly cover some of the basics.

The software is open source and was developed by a consortium known as the Open Handset Alliance.

The project is commercially sponsored by Google and the first handset using Android was released in September 2008.

What skills do you need to be an Android Developer?

This is a big question that deserves its own article. The video above explains in some detail, however in summary someone that has completed a relevant Android Developer course with a good understanding of Java will be able to begin a career as an Android Developer.

What is the role of an Android Developer?

The role of an Android Developer is to create mobile applications for the Android platform.

The beauty of this is that even a small team of programmers can actually launch an app without a massive budget, as long as they have the relevant skills.

In larger projects, the developer will often collaborate with cross-functional teams to develop a product, with programming, quality control, debugging, and launch all being part of the role.

1. Billions of people use Android phones (and need apps for them)

As Phil Nickinson, Editor of Android Central so aptly put in a recent tweet:

“Your mobile device has quickly become the easiest portal into your digital self.”

With one in two people on the planet carrying smartphones by 2023, the need for apps to run them is great.

This translates to limitless opportunities for the Android Developer entrepreneur, with plenty of job openings too, (see below for more on this).

Furthermore, the avenues for your developer skills are only set to grow. For the last decade, Android has been the best-selling mobile operating system in the world.

The fact that it now powers e-Readers, Android TVs, and boxes mean different kind of apps need to be created. You add the upcoming arena of the “Internet of Things” and you can see the scope of opportunities for the developers with the necessary skills.

Java is at the heart of Android development. Thankfully, Java is a relatively simple programming language to learn.

There are myriad online courses to get a new student started, and a lot of them affordable too.

(Check out our review of 10 of the best Android Developer courses on Udemy, here)

Java is also the best way for developers to start their path into Object-Oriented design. Essentially, once you have a working knowledge of Java, you can begin building a commercially viable Android application.

That being said, other languages are also used for Android App Development, so your skills can always grow as you work. C++, Python, and C# can all be incorporated into the development process.

You do not have to be part of a large silicon valley startup to launch a successful Android App.

Once you have the relevant development skills and have created a product you are happy with, you can register yourself as a developer on the Android platform and create your APK (Android Package Kit).

Once your app is finished, simply submit it to the Android mobile application development platform.

If you pass the quality control, your app will be available for the whole world to download via the Android app store.

In many cases, apps are usually approved and deployed in a day. This is very different from the highly stringent IOS store for Apple devices.

Getting accepted onto that is notoriously difficult and time-consuming, especially for a home-coder.

Should the idea of trying to launch your own app not appeal, there are a huge number of job opportunities for developers that prefer to be on the payroll.

Salary is excellent due to the high demand for skilled android developers, and your career can move in several directions within roles such as Mobile Application Developer, Mobile Embedded Software Engineer, Android Engineer, Mobile Architect, and many more.

The video above will give you an idea of what the different roles entail. The bottom line is, learning the skills of an Android Developer means your career path can evolve as your experience grows.

It is a dynamic and exciting sector, that will stimulate you for many years to come.

5. Your office is your laptop (work anywhere you want!)

Finally, and this is one of my favorite things about being an Android developer – you have freedom.

Want to try it alone or with a small team of entrepreneurs? Great, give it a go.

Prefer a larger company, but want to work from home or at a hotdesk inside a shared office space?
You can do that too.

Many companies, especially since the Covid outbreak, are perfectly happy with their coders working from their laptops, wherever is convenient for them. Location is no longer an issue.

You can also freelance, which means you can choose which projects you want to work on, and again, have the freedom to work where (and often when) you want.

The work-life balance that comes from this cannot be underestimated.