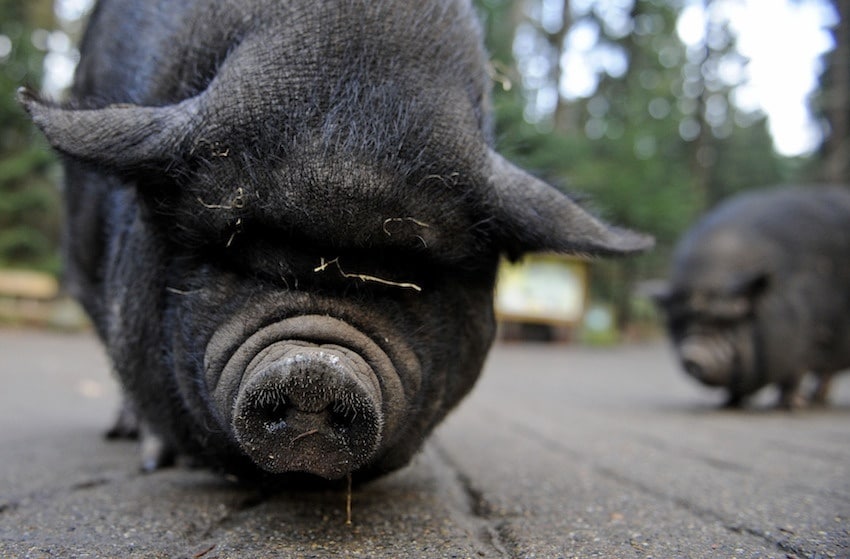 Lulu the pot-bellied pig created quite the media storm back in 1998. It was then that the world first heard about the pig that ‘played dead’ in the road to save her dying owner.

The story starts just a year before in Beaver Falls, Pennsylvania. Jo Ann and Jack Altsman had agreed to baby-sit their daughter’s Vietnamese pot-bellied pig, Lulu.

The temporary babysitting turned into a permanent fixture and the bond between the pig and her new parents grew strong.

Jo Ann’s husband Jack was away fishing on Lake Erie at the time. And no one else was around. The attack happened while Jo Ann was inside their vacation trailer at Presque Isle.

She collapsed on the floor and yelled for help. She even managed to throw an alarm clock out of the window in an attempt to get the attention of anyone that might have been nearby. All of that was to no avail however.

Bear, their dog, an American Eskimo, heard her yell out but only barked in response.

Lulu heard those cries of pain and decided to act. To get help she forced her way out of the yard in a way that left her skin torn and bleeding.

She then headed out onto the road to lay down in front of the traffic.

Amazingly, a few cars were reported to have driven around the then 150 pound pig.

After a driver finally stopped, Lulu led him back to the holiday trailer.

The man, who never came forward despite all the media attention the incident received at the time, had seen the cuts Lulu had suffered on her stomach and yelled out: “Your pig’s in distress.”

He then heard Jo Ann reply from inside the trailer, “I’m in distress, too,” she said. “Please call an ambulance.”

The man phoned 911 and Jo Ann was taken to The Medical Center, Beaver, for open-heart surgery.

Had 15 more minutes passed, the doctors said, she would have died.

And so Lulu’s fame was sealed. The local papers quickly covered the incident and before long The New York Times had ran a front page story about her.

LuLu was in USA Today and People magazine. News organizations and TV shows from Italy to Australia, UK to Brazil covered the story of the Pig that ‘played dead’ to save her dying friend.

Had it happened in the current age of the internet, Lulu would have been a Buzzfeed headliner.

TV appearances within the US followed thick and fast however. Lulu appeared on National Geographic’s “Amazing Animals.” She also made it onto the “Regis & Kathie Lee Show.” Jo Ann got a kiss from Johnny Mathis and LuLu got a fruit plate from Annie Potts.

A visit to the “Late Show With David Letterman,” saw Lulu appear alongside George Clooney, himself a Vietnamese pot-bellied pig owner at the time.

Clooney was so impressed by Lulu that one day he telephoned Oprah Winfrey on air. She had said a dog that that used a MAC machine for its paraplegic owner was the smartest animal around.

“I met someone who’s smarter,” Clooney told her.

Oprah sent a jet to pick up Lulu and Jo Anne and Jack for an appearance on her show.

At the Mayflower Hotel in New York, LuLu received the coveted Tiffany gold hero’s medal from the American Society for the Prevention of Cruelty to Animals.

Elizabeth Taylor, who was in attendance, told Jo Ann it was “the only time I’ve been in a room when all the photographers took pictures of another woman.”

There also was “Animal Planet” and the Discovery Channel. Jay Leno even offered to provide a sleeper train car for LuLu to travel to the West Coast, but the couple declined.

Because beyond all the attention and the celebrity circus, all Lulu really needed of course, was the continued affections of the Altsman family and a daily jelly donut or three.

This website uses cookies to improve your experience while you navigate through the website. Out of these, the cookies that are categorized as necessary are stored on your browser as they are essential for the working of basic functionalities of the website. We also use third-party cookies that help us analyze and understand how you use this website. These cookies will be stored in your browser only with your consent. You also have the option to opt-out of these cookies. But opting out of some of these cookies may affect your browsing experience.
Necessary Always Enabled
Necessary cookies are absolutely essential for the website to function properly. This category only includes cookies that ensures basic functionalities and security features of the website. These cookies do not store any personal information.
Non-necessary
Any cookies that may not be particularly necessary for the website to function and is used specifically to collect user personal data via analytics, ads, other embedded contents are termed as non-necessary cookies. It is mandatory to procure user consent prior to running these cookies on your website.
SAVE & ACCEPT