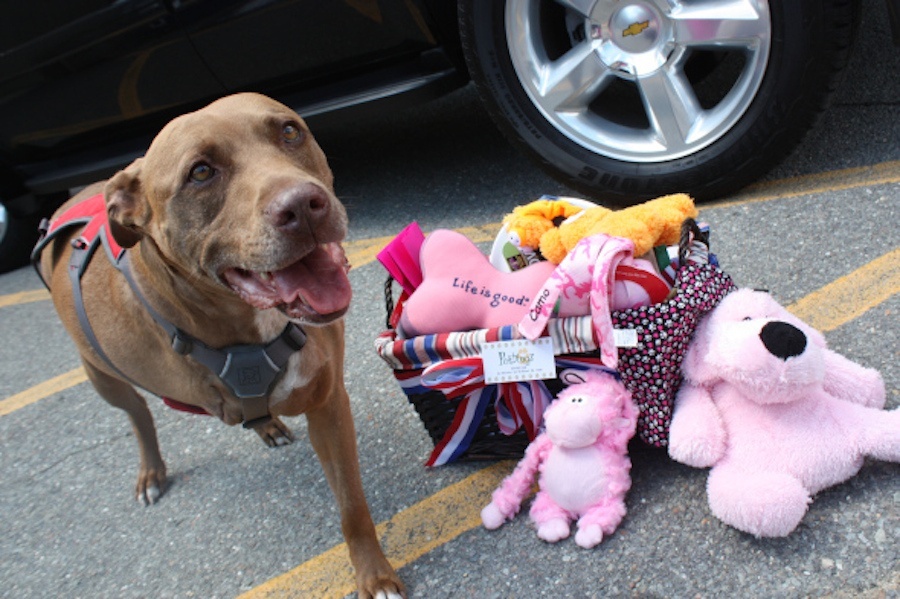 A dog’s loyalty to humans is truly unique and quite often awe inspiring. Take this story of an incident that took place back in 2012. A Pit Bull named Lilly risked her life to pull her unconscious owner from the path of an oncoming freight train.

Lilly saved her owner, Christine Spain from certain death. However, the loyal dog suffered serious injuries in the process.

Spain had received the dog from her son a few years prior to the accident.  He had rescued Lilly as a therapy dog for his mother who had been battling with alcoholism.

Thankfully, on the day she fell unconscious on the railroad tracks in Shirley, Mass. Lilly was by her side. With no one else around to alert the emergency services, it wasn’t long before a freight train was heading along the tracks towards where Spain lay helpless.

“I don’t know if she collapsed or what happened, but she passed out,” Rob Halpin, of the Massachusetts Society for the Prevention of Cruelty to Animals told the Sentinel and Enterprise.

The only witness to the incident was the train driver. He told the police that he saw a dog frantically pulling at a woman as he drew closer.

The driver also said that even though he couldn’t stop the train in time, the dog would not give up and move off the tracks. He continued pulling on his owner in an attempt to save her.

The driver did everything he could. He heard a thump and thought he hit both.

After the train stopped and he got off the train, the driver found that Spain was unharmed. Lilly had dragged her off the tracks in time. Unfortunately, the 8-year-old Pit Bull had taken the full impact herself. She suffered a severe injury to her right foot. She also fractured her pelvis in multiple locations and sustained other internal injuries.

“I truly believe things happen for a reason,” Spain’s son David Lanteigne told the Sentinel and Enterprise. “We found Lilly to save her life, and she returned the favor. She almost died here.”

In the end, Lilly’s foot could not be saved and her right front leg had to be amputated. Over time she recovered from her other impact injuries.

“I’m supposed to be the strong one. I’m supposed to be here for her, but she’s been so great, so tough through all this that it almost feels like she’s the one comforting me, being there for me and making me feel better,” Lanteigne said.

And that’s what our loyal companions can so often do. They put themselves on the line without fear or regret. They are there at the end of the day, tail wagging their hearts full of love for us humans. We think we are caring for them, but really they are the ones looking after us.

This website uses cookies to improve your experience while you navigate through the website. Out of these, the cookies that are categorized as necessary are stored on your browser as they are essential for the working of basic functionalities of the website. We also use third-party cookies that help us analyze and understand how you use this website. These cookies will be stored in your browser only with your consent. You also have the option to opt-out of these cookies. But opting out of some of these cookies may affect your browsing experience.
Necessary Always Enabled
Necessary cookies are absolutely essential for the website to function properly. This category only includes cookies that ensures basic functionalities and security features of the website. These cookies do not store any personal information.
Non-necessary
Any cookies that may not be particularly necessary for the website to function and is used specifically to collect user personal data via analytics, ads, other embedded contents are termed as non-necessary cookies. It is mandatory to procure user consent prior to running these cookies on your website.
SAVE & ACCEPT