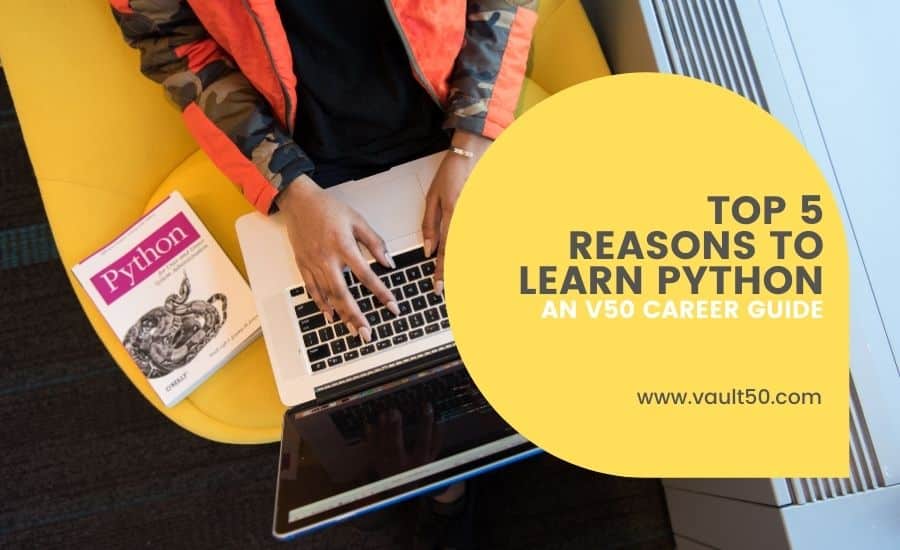 Learning a new skill is always worthwhile. However, when it comes to programming it can be difficult deciding which language to invest time and money into mastering?

What are the prospects afterward? Are there plenty of job opportunities? Will it mean you’ll get to work on the types of projects you’re interested in after learning the language? What are the wages like?

As you can see, there are many many questions.

In this article, we will look at the 5 top reasons you should learn Python in 2022 to help you decide whether it is the right programming language for you.

Top 5 reasons you should learn Python

1. It is a versatile programming language with lots of uses

One of the main factors you should look for when choosing which programming language to learn, is how versatile it is.

Will it provide plenty of opportunities once you have mastered it? The answer when it comes to Python is a very positive, yes!

In fact, in terms of usage, Python is fast competing with C, R, and Java in terms of versatility and widespread application within today’s IT world.

It is in many ways an easier and more efficiently-written alternative to those programming languages.

This, of course, is a big reason for its current popularity.

Some of the largest tech companies in the world use Python. Facebook, Google, and Microsoft all employ programmers with Python skills.

Peter Norvig, director of research at Google, said in a recent interview that,

“Python has been an important part of Google since the beginning and remains so as the system grows and evolves. Today dozens of Google engineers use Python, and we’re looking for more people with skills in this language.”

Netflix is also a big fan, with Python being used within their Content Delivery Network (CDN) as well as their monitoring systems.

So not only are Python skills necessary for the building of these tools but they are also required for the day-to-day managing of them too. This translates into lots of job opportunities.

If working for one of the established tech companies doesn’t suit you, you could always get involved with a fledgling start-up.

Relevant small companies like Python because it is suitable for quick prototyping. Startups are able to build their first minimum viable product (MVP) using Python, meaning programmers with Python skills are sought after.

Essentially, Python can help you further your career within a wide range of companies.

3. Python is the fastest-growing programming language

As we have established, Python is popular with companies of all sizes.

Furthermore, the current trend and prioritization of big data and data science in general (including the ongoing growth of machine learning and AI), has made Python the fastest growing programming language in terms of students learning and on-the-job use.

A 2017 study carried out by Stackoverflow.com shows Python as the fastest-growing major programming language on their site in terms of traffic and forum questions.

If the account of one website doesn’t convince you, the TIOBE Index (released April 2021) puts Python as the 3rd most queried programming language behind C and Java respectively.

(This data is based on the number of search queries across 25 search engines in 2020, alongside the number of skilled engineers worldwide in each field.)

As a result of the numbers, TIOBE named Python the 2020 programming language of the year for gaining the most popularity during the calendar year.

4. Python is intuitive, making it easy to read, write, and learn

Python is a streamlined programming language that was built in order to be less complex than preceding languages such as C.

The result is a simple fact that Python is easier to learn when compared to alternative languages.

Working professionals often cite Python as being a language with a simple syntax that is easy to learn.

It is especially recommended for new coders because of its intuitive nature. For some, it can be a stepping stone to more complex programming languages, (however, this is not often necessary considering the wide application of Python).

The efficient syntax also means you can see the fruits of your labor relatively fast.

Being an interpreted programming language, (unlike compiled languages such as C++ or Java), you can run each line of code as soon as you finish writing it.

For testing and troubleshooting, this is highly beneficial; you do not have to wait until you have finished to see if there has been an error in your code.

Another benefit of the ease of use is that it is very possible to learn the language from home, via one of the many online Python courses available.

With the flexibility of courses such as those provided by Udemy, you can learn alongside your full-time job (or while in Covid lockdown), in order to jump-start your career in a new direction.

It is no secret that programmers can make a lot of money doing what they do. Armed with Python skills your potential for a very healthy salary is good.

Statistics via PayScale.com also show the lucrative nature of Python.

A programmer with Python skills has a wide choice of sectors and therefore roles, to choose from. You only need to look at point 1 on flexibility to understand the many options.

And where the supply of viable candidates cannot meet demand, wages are inflated. That is no bad thing if you have the skills.

So there you have it, 5 excellent reasons to start learning Python today. The prospects look good, and that will not change for the foreseeable future.